These are some of the things I have built out of enthusiasm or curiosity. They are all labors of love. Crafting them has been a way to hone my skills while creating value for others.

An open-source, community-edited Chinese-Hungarian dictionary that I initially conceived in early 2015. It took a bit over 2 years to seed the dictionary with its first 11k entries, which I translated from the English and German in CC-CEDICT and HanDeDict.

Back in late 2015 HanDeDict became an orphan, and since I had already made a lot of progress with the website software, I re-published it at handedict.zydeo.net.

HanziLookupJS and a bunch of texts right here are also offshoots of this project. I wouldn't advise anyone to embark on a similar adventure: Chinese lexicography has a way of sucking you in ;-) 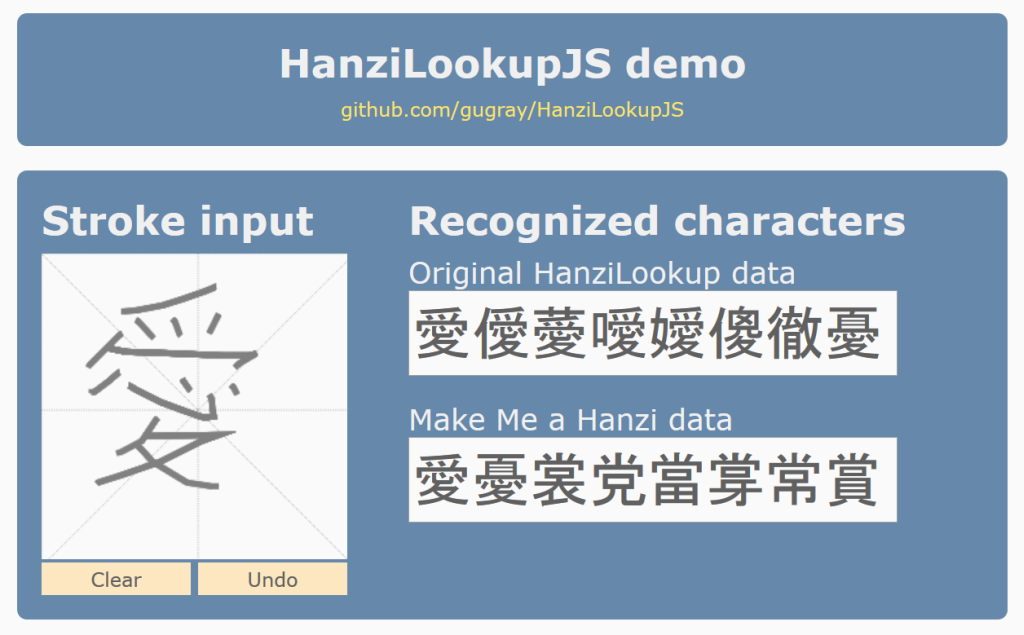 HanziLookupJS is a library based on Jordan Kiang's original HanziLookup from 2006. It contains data derived from Shaunak Kishore's Make Me a Hanzi, and an improved character recognition algorithm.

Check out the online demo at gugray.github.io/hanzilookupjs, or the code itself. Going by the number of stars and forks, this is my most popular repository on Github :)

A German vocabulary test inspired by testyourvocab.com. I basically just wanted to find out about my own vocabulary, but eventually went down the rabbit hole and dug deeper into vocabulary stuff than any sane person would ever want to.

I've written a bunch of texts too but chose not to include them on this site because they are in German. A bit over three years in, I analyzed the results that the site has harnessed and wrote about it in English. Make sure to read Your German vocabulary on a curve.

Now the least you can do is take the test yourself and share it with your friends. Or check out the source code on Github.